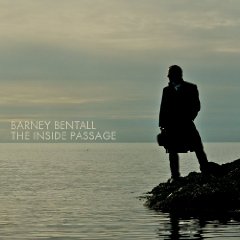 During the past decade Barney Bentall has transformed personally and musically to emerge as one of Canada’s prolific folk/roots singer/songwriters. His sixth studio album, The Inside Passage, paints portions of a life’s journey.
Bentall rose to critical acclaim during the 80’s with hits Something To Live For and Come Back To Me as the leader of Barney Bentall and The Legendary Hearts.
The recently released The Inside Passage only shows that Bentall is still at the top of his game. Amazingly the songs were written during the Spring and Summer of 2008 and then recorded in a two week span.
The album’s musical foundation is a cross section of Canadian country flair woven through every track with Bentall’s vocals as he strums an acoustic guitar, Daniel Lapp is the fantabulous fiddler and Johnny Ellis dishes up guitars, pedal steel, mandolin, banjo and keyboards.
The CD catches the listener immediately from the first song with catchy lyrics and riffs in the albums first released single “Hold My Heart”. The chorus “Hey, when I fall to pieces / When I fall apart / Would you be so kind and hold my heart,” certainly delivers proof that Barney still possesses a natural gift which he graciously shares.
Each of the 11 songs reflect Bentall’s distinctive fingerprint, only to portray a continued growth with his talent. The autobiographical title track The Inside Passage chronicles his relationship with his deceased Dad and Face to Face is obviously a song for his daughter on her wedding day.
The final tune is a Murray McLaughlin collaborative ballad, Disappearing, revealing an inner child prevalent in most people despite their age.

The Inside Passage is one of the got to haves and is reflective of a Canadian musician who has paid his dues and dually deserves recognition by the music industry, his followers, listeners and peers.