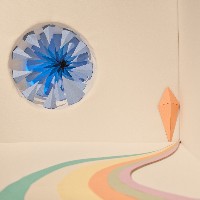 The Paint Movement are a Toronto based indie-pop band that incorporate elements of chamber-rock and soul to establish an innovative and progressive style. After independently releasing an EP locally, followed by a 7" vinyl on Nevado Records, this self-titled album is their debut full-length CD. The Paint Movement  has been in the process of being made for over a year, and it does not dissapoint those who have been waiting. The album was mixed and produced by David Newfeld, who is fairly well known for his work with Apostle of Hustle and Broken Social Scene amongst other great upcoming rock acts.

The Paint Movement begins with "Young Lights", a song that showcases the band's smooth saxophone leads and simple but danceable rhythm section. The album then moves into "Embers", a track with catchy polyphonic melodies which draws similarities to the Arts & Crafts sound that Newfeld assisted in popularizing. The Paint Movement display their powerful vocals in "Fortunes Window", with alternating male and female vocal parts accompanied by groovy soul rhythms. "Curiosity" is The Paint Movement's most sensual song, with interesting dynamics and romantic imagery. Some other excellent moments include the jazzy piano-driven "Heart Lids", and the emotional folk-rock feel of "Skip to the West". The Paint Movement is a very promising group with impressive musicianship and songwriting that makes them standout from the majority of Toronto indie-rock acts.