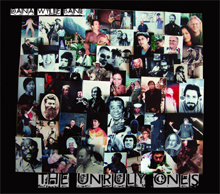 The Unruly Ones
Tiny White Girl ( )

The Unruly Ones, is the Dana Wylie Band’s sophomore album.  It will make you laugh, squirm, engage in introspection, clap your hands, stomp your feet and want to play the juice harp. Dana Wylie reminds me of a stage girl version of Tom Waits with a sprinkle of Joni Mitchell.  One wonders how such a big voice, talent and seemingly big attitude fit into such a diminutive frame. When you add the other two wandering minstrels, Nye Parsons and Jeremy Hellard the combination becomes a runaway train that gains velocity by the second.

Dana Wylie’s lyrics tug at your shirt tail, and, at times reach down through your ears and give your guts a little twist. “Talent Crush” shows up our penchant for placing people on pedestals, much to our own detriment.  When you think she’s going to poke at the conscious collective again, Dana goes on an inward spiral of self examination and discovery, with a song like “What the Mirror Said”.  The Ballad of June and Dougie (I’m Not Gonna Play Second Fiddle to Your Guitar) has some great work by contributing musicians and is a rollicking good yarn to boot.  All this is couched by outstanding musicianship by all three members of the band.  I mean, how did they find that double bass player, Nye Parsons?  He holds the bottom with such a nonchalant looseness that you can take a breath in the space between the notes.  Jeremy Hellard  shows us yet another layer of talent, by the strength and clarity of his voice  in “Hometown Boy”, which is a great mid point in the album.