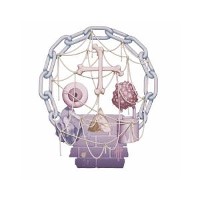 Houratron is a solid assault of a high impact dance music. Crytocracy follows up 2009's popular "Corporate Occult" single, which helped establish some of Huoratron's fanbase. Aku Raski (aka Huoratron) lays down solid beats and piles it with the yells of synthetic melody and buzz that's punctuated by shifting frequencies and tight blips and bloops. Throw in some sirens and vocoder and you've got yourself one frightening record. Be warned, it is not for the light-hearted.

Classifying this music comes as no easy chore. Calling it chiptune doesn't pack enough of a punch. Huoratron is harder and darker than that. The 8-bit sounds have been layered with earth-shaking bass and growls of fat synth that give it way more depth. The music can also fall into the house genre, but again I'm hesitant to classify it under. The music is diverse and rapid. Raski doesn't seem to sit still with a song. He's always moving and shifting it into new territories.

Crytocracy is the sort of album that begs to be cranked on a really good, bass-heavy system. The depth in it makes for a great listen and the pounding beat gives it all the dance-floor credibility you need, just add a heavy dose of energy and you'll be dancing hard.